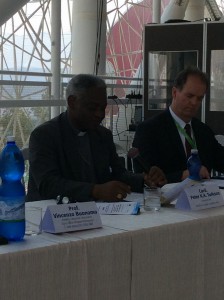 Farming is a “noble vocation” that should be marked by gratitude and responsibility, Cardinal Peter Turkson told an international gathering of agricultural leaders in Milan this morning.

While true of other human pursuits, this is especially the case for agriculture, because food is “essential to human life,” and not just “another product,” said the cardinal, who is the president of the Pontifical Council for Justice and Peace.

Turkson delivered his remarks at the onset of a symposium on faith and farming, which is being held at the World Expo in Milan from June 27-28.

Throughout his talk, he highlighted the connections between Laudato Si, Pope Francis’ recently published eco-encyclical, and agriculture. He urged agricultural leaders to take into account the well being of both human and natural ecology in their work.

The cardinal outlined a number of challenges facing contemporary agriculture, including industrialized operations that encourage waste, damage the environment, and displace small-scale farmers.

“Is our system aimed at producing money or food?” Cardinal Turkson asked rhetorically. He added that not only is there a right to food, but also a right to produce food, a recognition of the difficulties of small-scale agricultural operations in an increasingly globalized market.

Turkson also addressed the use of genetically modified organisms (GMOs), which he said are not bad in their own right, but have “associated evils,” such as the concentration productive land among a few owners, increased use of pesticides, and the loss of opportunities for rural workers.

Turkson highlighted practical ways of addressing these challenges, many that were touched on by Pope Francis in Laudato Si, including investment in rural infrastructure and the development of systems of sustainable agriculture.

“When farmers, traders, buyers and sellers see their wealth as a common good rather than just private property, and the food they produce, prepare and distribute as sustenance we share—then the whole enterprise will sustain our human being and our common home,” Turkson concluded.

The symposium on faith and farming that Cardinal Turkson spoke at is part of a larger initiative to articulate a vocation to agriculture. The effort is being led by Catholic Rural Life (USA) and the International Catholic Rural Association in partnership with the Pontifical Council for Justice and Peace.