The following post is written by Dr. Mark Neuzil, a professor and journalist from the University of St. Thomas, who is in Milan taking part in the Faith, Food & the Environment symposium. Follow him on Twitter.

Food and culture are permanently mixed; it is difficult to have a complete understanding of each without the other.

In the case of the World’s Exposition, which is in Milan, Italy, this year, each of the represented nations attempts to highlight a particular food — Czech beer, Belgian waffles, Polish sausage, Italian wine — that represents its culture. 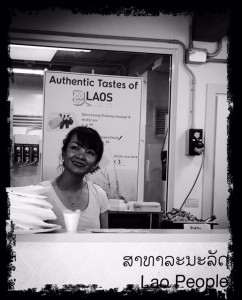 As the international symposium on Faith, Food and the Environment opens Saturday at Expo2015, it is noteworthy that the exhibit put up by the United States echoes the symposium’s themes. The Americans have decided to build a long ramp to a second-story video extravaganza; on the walls along the ramp are quotes from farmers, ranchers, fishermen and others who are responsible for the food we eat.

For example, an Alaskan fisherman named Heather Hardcastle says, “For us fishing is not a livelihood. It is a way of life.” This is a theme that recurs often in Pope Francis’ encyclical Laudato Si. Overfishing is a known problem, and the pope may have been thinking about that type of environmental struggle when he wrote “Many intensive forms of environmental exploitation and degradation not only exhaust the resources which provide local communities with their livelihood, but also undo the social structures which, for a long time, shaped cultural identity and their sense of the meaning of life and community. The disappearance of a culture can be just as serious, or even more serious, than the disappearance of a species of plant or animal.” The pope mentions fishing eight (!) times in the document, and that does not count a long section on the importance of water. 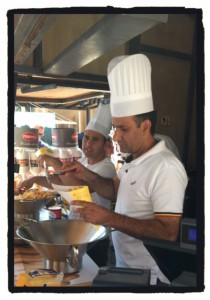 The meaning of life, community and culture as they relate to food show up elsewhere along the American wall. Jack Lafluer, a cranberry farmer from Massachusetts, said simply “I’d like to pass our farm on to the next generation.” Ohenten Kariwatekwen said, “We have been given the duty to live in harmony with one another and other living things.” In the Christian tradition, one often thinks of St. Francis of Assisi as the example of someone who lived in harmony with nature, and it is no coincidence that the pope draws heavily from St. Francis in the encyclical.

As Kariwatekwen highlights, duty and faith are often spoken of together. John Paul II said Christians “realize that their responsibility within creation, and their duty towards nature and the Creator, are an essential part of their faith.” Faith is a way humanity makes sense of itself; properly ordering priorities and relationships and helping us live in harmony with our neighbors. As Pope Francis emphasized, faith can also help us live in harmony with nature.

Thinking about agriculture (the production of food) as a vocation—a special calling, with attending responsibilities—is a way to live out duty and faith. One of the origins of the word duty is from the Middle English duete, which means due.

None of these themes are new, but the Belgian fries, German sausages and Thai spices at EXPO2015 reminds us that they cut across cultures, religions and regions.