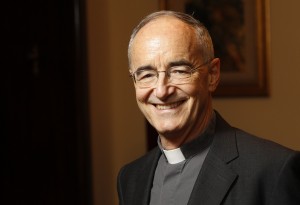 Father Michael Czerny, the Chief of Staff to the president of the Pontifical Council for Justice and Peace, will attend the Faith, Food & the Environment symposium in place of Cardinal Peter Turkson.

The cardinal has been called upon by Pope Francis to strengthen the Vatican’s response to the growing needs of the local church in his native West Africa in the face of the escalating Ebola crisis.

Father Czerny, a Jesuit, has been Cardinal Turkson’s top advisor since 2010. Previously, he has served as the founding director of the African Jesuit AIDS Network (2002-2010) and as the Secretary for Social Justice at the Jesuit General Guria, Rome (1992-2002). Born in Czechoslovakia in 1946, Fr. Czerny was raised in Montreal and entered the Society of Jesus in 1963.

Father Czerny will deliver the cardinal’s prepared remarks on “Faith and the Call for a Human Ecology” as scheduled. The symposium itself—and the broader Vocation of the Agricultural Leader initiative—will continue to move forward with the close collaboration of the Pontifical Council for Justice and Peace.

Although the cardinal’s presence will be missed, the work of the symposium will unfold as planned, as over 70 national leaders in environmental studies, agriculture and food production, and moral theology will gather in order to explore the connection between faith and farming. The developments from the symposium will be used to produce a practical set of resources that will help the next generation of food and ag leaders understand how their faith informs their work.